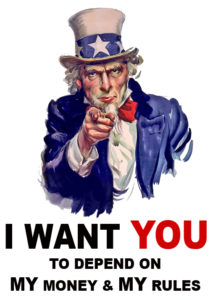 Did you know that the state of Iowa received $8.5 billion from the federal government in 2017?  Since 2009 Iowa has annually received, on average, $7.5 billion from Washington D.C, though the exact amount fluctuates from year to year. 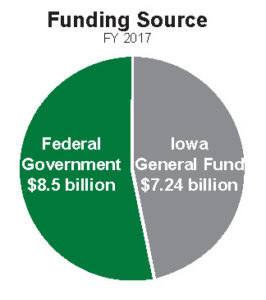 Over half of the money flowing through state government is subject to the next federal spending crisis. Federal funding to Iowa is never free. Most of it comes with very specific strings attached requiring the state to commit additional funds and follow Uncle Sam's rules.
Iowa Must Protect Itself from Washington's Mismanagement

There is no sign that Washington will get its fiscal house in order anytime soon. The national debt is projected to grow to $30 trillion by 2027 and that doesn't account for Social Security, Medicare, and Medicaid. It is estimated those programs alone have over $80 trillion in unfunded liabilities.Most programs supported by federal dollars in Iowa are worthwhile.  But just as we develop risk assessments and contingency plans in so many other areas of our lives, state government needs to take stock of all federal funding and ensure that Iowa can remain financially independent from Washington.  So what steps does Iowa need to take to ensure we aren't reliant on the mercy of political outcomes in D.C.?

Iowa will always be impacted by decisions made by Congress, but the more Iowa becomes dependent upon the federal government, the more our state loses sovereignty. Taking a full inventory of federal funds will spotlight the impact of federal dollars, make clear where federal money is going and what regulations are being forced upon Iowa, and as a result, help us prepare for when Uncle Sam is no longer able to provide such generous support to our state.

According to History.com, the nickname Uncle Sam is linked to Samuel Wilson, a meat packer from Troy, New York, who supplied barrels of beef to the United States Army during the War of 1812. Wilson stamped the barrels with “U.S.” for United States, but soldiers began referring to the grub as “Uncle Sam’s.” The local newspaper picked up on the story and Uncle Sam eventually gained widespread acceptance as the nickname for the U.S. federal government.

The image of Uncle Sam used in this article was created by artist James Montgomery Flagg. During World War I, this image and the words “I Want You For The U.S. Army” was used as a recruiting poster. The image was first used on the cover of Leslie’s Weekly in July 1916 with the title “What Are You Doing for Preparedness?”