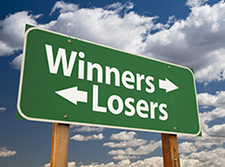 March is an exciting time of the year. Each week brings a new basketball
tournament where upsets and last second shots capture our attention. We admire success when both teams play by the same rules on an even playing surface. What if one of the basketball teams was able to have extra players on the court or the height of one team’s basketball hoop was lower than the other team’s? Very few people would watch or teams participate because the winner and loser is essentially picked before the game even starts.

Iowa’s complex corporate tax system picks winners and losers too. To cover up the nation’s highest corporate income tax rate of 12%, Iowa uses tax incentives in the form of tax credits to attract and retain businesses.

An editorial in the Cedar Rapids Gazette calls for a review of Iowa’s tax credits and exemptions. Not every credit in their editorial is business related, but as they say, “Figuring out what works and what’s waste,” is a good idea.

Tax policy rewards and punishes. When something is taxed more, you get less of it and when something is taxed less, you get more. A few examples of tax incentives within Iowa’s corporate tax system in Fiscal Year 2017 are $56.8 million for the Research Activities Credit to encourage research activities and $37.6 million for the High Quality Jobs Program to encourage the creation of high-paying jobs.

It is good for Iowa to encourage corporate research, job creation, and many other economic goals. But, the process should be simplified and available to every business. Eliminate these and other tax credits, LOWER THE TAX RATE FOR ALL BUSINESSES, and create a pro-growth economic environment. Along with lowering tax rates, protections need to be in place to make it hard for tax rates to increase in the future.

With a simple, transparent, and predictable tax structure, Iowa will encourage economic opportunity for all businesses. We will also have far more winners.

Now is the time to press on with the goal of creating reasonable limits on state taxes and spending to spur economic growth. This will not be easy. The big spenders in Des Moines are loud and powerful. Special interests do not want to see their funding or benefits reduced. Iowans for Tax Relief is one of the few organizations at the Capitol without their hand out asking for more taxpayer dollars.

Invest in our work NOW to ensure victories for Iowa taxpayers!

Click here to donate to Iowans to Tax Relief. 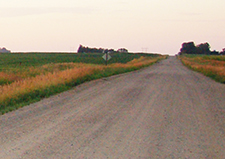 It is time to stick a fork in some roads and bridges. The Cedar Rapids Gazette recently had a pair of articles about Iowa’s roads and structurally deficient bridges.

Iowa’s 24,242 structurally deficient bridges are the most of any state and third highest in percent of total state bridges according to the American Road & Transportation Builders Association 2016 annual bridge report. Structurally deficient does not mean the bridge will collapse when a school bus or grain truck drives over. It can simply mean the bridge deck is not wide enough to meet current standards.

The 10 cent per gallon increase in the fuel tax increase that passed in 2015 added an estimated $213 million per year to the state road use tax fund. Based on the state’s funding formula of 47.5 percent for the primary road system, 24.5 percent for secondary county roads, 20 percent for city streets, and 8 percent for farm-to-market county roads, the smallest piece of the pie is left to fix structurally deficient bridges. Perhaps Iowa does need to maintain fewer bridges and miles of roads.

In July, 2015, then Iowa Department of Transportation director Paul Trombino said he expected the state’s overbuilt and unsustainable road network to “shrink,” according to Charles Marohn of Strong Towns. Trombino also said Iowans should figure out which roads “we really want to keep” and let the others “deteriorate and go away.”

As with every other part of state government, we need a smaller and smarter transportation system. It either needs to become smaller by having fewer roads and bridges or become smarter by changing the formula to properly fund what we already have.

We Are Paying Too Much!

A friend you haven’t seen in a long time invites you to dinner at a nice restaurant. You are excited to see them and accept. As you are driving there you tell yourself you will only order soup and a salad because you have stuck to your diet and have already lost 10 pounds. After looking at the menu, you notice every item includes an appetizer, salad, large entree, desert, and drink. The waiter says you are required to get and pay for everything. Sounds ridiculous doesn’t it? So is the bidding process for state government construction projects

Over 80 percent of Iowa contractors and their employees have chosen not to form or join a union. Even though that is a vast majority, this decision puts them at a tremendous disadvantage when bidding government projects under current Iowa law. Government mandated project labor agreements (PLA) require all contractors to give union officials complete control over bargaining, exclusively use union hiring halls, and force workers to pay union dues.

Jeremy Price, owner of Price Industrial Electric said in a Cedar Rapids Gazette guest column, “In my opinion, the worst component of a 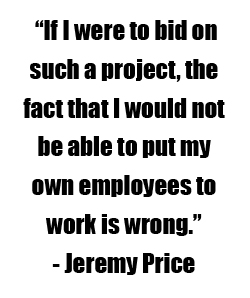 PLA is the requirement for a contractor to hire its workforce through a labor union. If I were to bid on such a project, the fact that I would not be able to put my own employees to work is wrong. My employees live here, pay taxes here, and are active in our community. They should not be kept from working on public projects simply because they have voluntarily made the choice not to belong to a union.”

As a result of PLAs, taxpayers can end up paying more. The Association of Builders and Contractors says that PLAs discourage competition which results in the bid price increasing. This drives up construction costs by as much as 18%.

Ending project labor agreements will protect taxpayers and non-union construction workers. This will give a vast majority of contractors a fair playing field when bidding on government projects. It is hard to stay on a diet when you have paid for a table full of food. It is just as hard to reduce the size of government when we exclude a vast majority of contractors from submitting a competitive project bid.

These are not ITR sponsored forums