Calm Before The Storm

The traditional saying of “the calm before the storm” is being played out at the Capitol this week. It seems there will be a period of high activity occurring shortly. However, all of the major issues legislators want to work on seem to be on hold until the deappropriation process, or spending reduction, for the Fiscal Year 2017 budget is completed.

Last year’s legislature budgeted to spend right up to the maximum of estimated revenue for 2017. Tax receipts are now estimated to grow “only” $304 million over FY 2016, instead of the $400 million in growth that was initially estimated. This means there is an unexpected gap in the budget of slightly more than $100 million.   New legislators have the unenviable task of finding $100 million in spending cuts to be spread out over the remaining 5 months of the current fiscal year which ends June 30. As we mentioned in the January 6, 2017 ITR Watchdog, Iowa isn’t receiving less money this fiscal year, it is spending too much!

Legislators have questioned some of the governor’s proposed cuts. In an interview with O. Kay Henderson of Radio Iowa, Speaker of the House Linda Upmeyer said, ““We’ve got a couple of different ideas than the governor, so we’ll have those conversations and by early in the week we’ll be able to hopefully file a bill and get it moving through committee and get it done.”

Senate Majority Leader Bill Dix told Rod Boshart “We’re looking at all the proposals that we have and no decisions have been made. We’re going to do everything we can to find that agreement as quickly as we can,” he added. “The longer we wait, the more difficult it gets to make those reductions in the time frame necessary.” 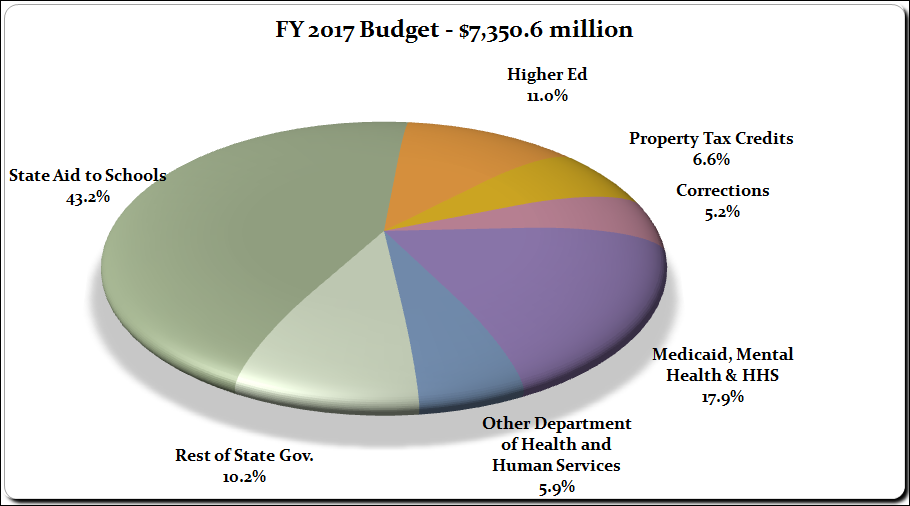 The chart, above, shows the Fiscal Year 2017 budgeted appropriations and expenditures divided into six categories and the percentage of the each. Below are the total dollar amount for each category.

Spending should have been addressed last year, but removing a total of $100 million from this budget should be able to be accomplished. Once this SPENDING PROBLEM is fixed, the storm of activity will arrive with legislators pushing their agendas.

We will keep you updated of any proposals made by the House or Senate. Keep an eye on our new Iowa Tax News page, Follow us on Facebook – @IowansforTaxRelief, or Twitter – @ITRWatchdog to stay updated daily.

Iowans for Tax Relief is here to keep you informed. Please keep your legislators informed.

While there’s not as much tax revenue as originally predicted, Dix says the state is still collecting more taxes this year.

“We only have so much money,” Dix says. “…I would suggest that should be plenty for us to find a way to accomplish a balanced budget that treats the state budget like a family budget.”

In Iowa, state government’s contribution in 2015 for state employees was estimated at 99.4 percent for single coverage and 97.6 percent for family coverage.

Lower-than-expected revenue returns are forcing legislators to make about $110 million in program cuts in the current budget year. Gov. Terry Branstad made his proposals last week, but lawmakers must finalize the spending plan.

“I really don’t want people distracted by a lot of other things until we get that done,” Upmeyer said.”… Everybody’s working on things, so I anticipate we’ll have a lot more bills filed next week.

You don’t have to be at the Capitol to be an advocate! Legislative forums are great opportunities to meet your legislators. Attend a forum near you! These are not ITR sponsored forums.