Individuals, entrepreneurs, and businesses
vote with their feet.

States with a low tax and regulatory climate will continue to be more attractive than Iowa.

Triggers were used to protect Iowa’s budget from unpredictable revenue and to ensure financial stability. Iowa’s financial picture is now promising and we can responsibly have these new rates take effect.

If those two items don’t happen, rates will remain high until those targets are met. 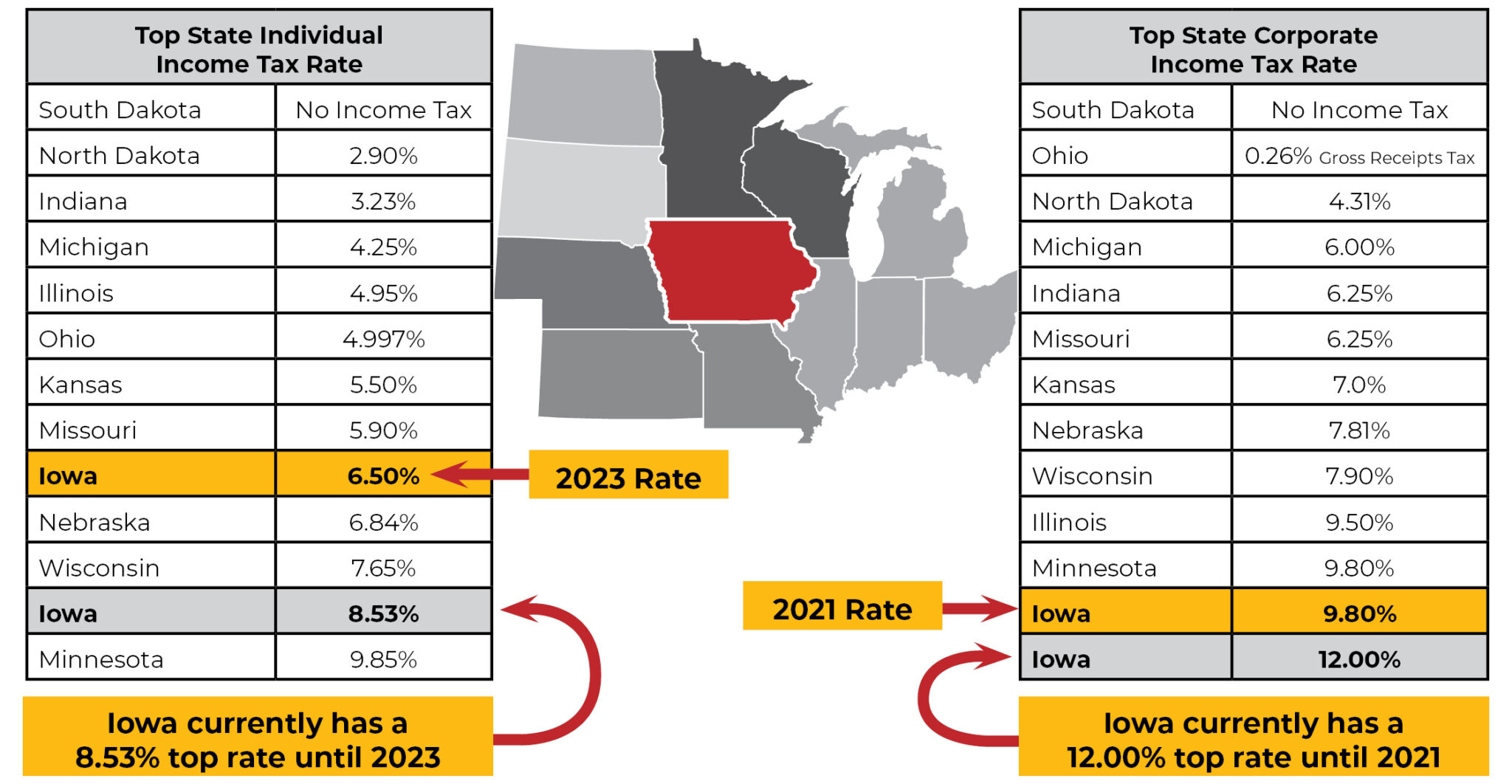 Under conservative leadership, Iowa has moved in the right direction on taxes. In 2018, the Tax Foundation ranked Iowa as one of the worst states in the country (45th) on their State Business Tax Climate Index, a comprehensive index that considers the full tax picture of all states, including individual, corporate, sales, and property tax rates, as well as state unemployment levels. On the Tax Foundation’s 2021 index, Iowa has moved up five places to 40th. Unfortunately, 40th worst is still worse than all neighboring states except Minnesota and Illinois. In fact, our neighbor to the northwest, South Dakota, comes in 2nd on the Tax Foundation’s list. While there is still clear room for improvement, conservative leadership in the House, Senate, and Governor’s office should be commended for their actions that have noticeably improved Iowa’s national standing on taxation.

In 2018, the Iowa Legislature took on significant tax reform for the first time in decades. The bill that ultimately passed was a good first step; however, much of the tax relief in that legislation was subject to revenue triggers that must be met before lower rates are enacted. These revenue triggers create a high bar that make it uncertain when, or if, Iowans will see the final reduced rates promised by the legislation. Understandably, triggers were utilized to protect Iowa’s budget from unpredictable revenue levels in the future and to ensure the state’s continued financial stability. The future, though, is here, and Iowa’s financial picture is promising. We now know that Iowa can responsibly have these new rates take effect.

While Iowa’s tax picture has improved, so, too, has our state’s financial situation. Thanks to conservative budgeting practices, Iowa’s reserve accounts are full, and the state ended the most recent fiscal year with a surplus over $300 million. It is time to remove the triggers from the 2018 tax bill and deliver the tax cuts promised by the legislation, as well as to consider additional avenues for cutting taxes.
During the 2020 legislative session, Governor Reynolds offered her Invest in Iowa Act as a starting point to further reduce the tax burden on hardworking Iowans. Iowans for Tax Relief supported Governor Reynolds’s proposal as one of many possible ways to cut Iowans’ taxes. Additional future reductions should also be considered, perhaps with the utilization of automatic rate cuts as revenue grows to levels established by the legislature.

Further, legislators should consider broadening the sales tax base or reducing tax credits as ways to achieve lower tax rates. Creating a fairer tax environment can help encourage development by leveling the playing field for all individuals who may want to do business in Iowa. The free market should pick winners and losers, not the government.

The 2020 election results offered a clear mandate from Iowa voters: they are happy with the direction that political leaders are taking this state, and they want to see the passage of more conservative policy.