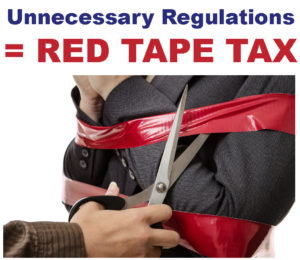 Occupational licensing exists under the guise of protecting consumer health and safety, but often, it serves instead as an excessive or unnecessary barrier to entry into the workforce.

A report from the Institute for Justice on job licensing found that Iowa’s job licensing requirements are the 37th-most burdensome in the country. In the report, the Institute for Justice analyzed 102 lower-income occupations and found that Iowa requires licenses for 71 of those occupations. This red tape tax is a regressive barrier to entry that hurts both workers and consumers.

Rep. Dave Deyoe (R-Nevada) has championed job licensing reform this legislative session. His bill, HF 752, would require a full evaluation of all of Iowa’s occupational licenses every six years. This legislation passed out of the House Labor Committee with bipartisan support and is scheduled to be debated by the full Iowa House on Monday.

Other legislators are taking notice of this legislation, including Rep. Megan Jones (R-Spencer) who authored a guest column on occupational licensing that appeared in the Spencer Daily Reporter last Sunday.