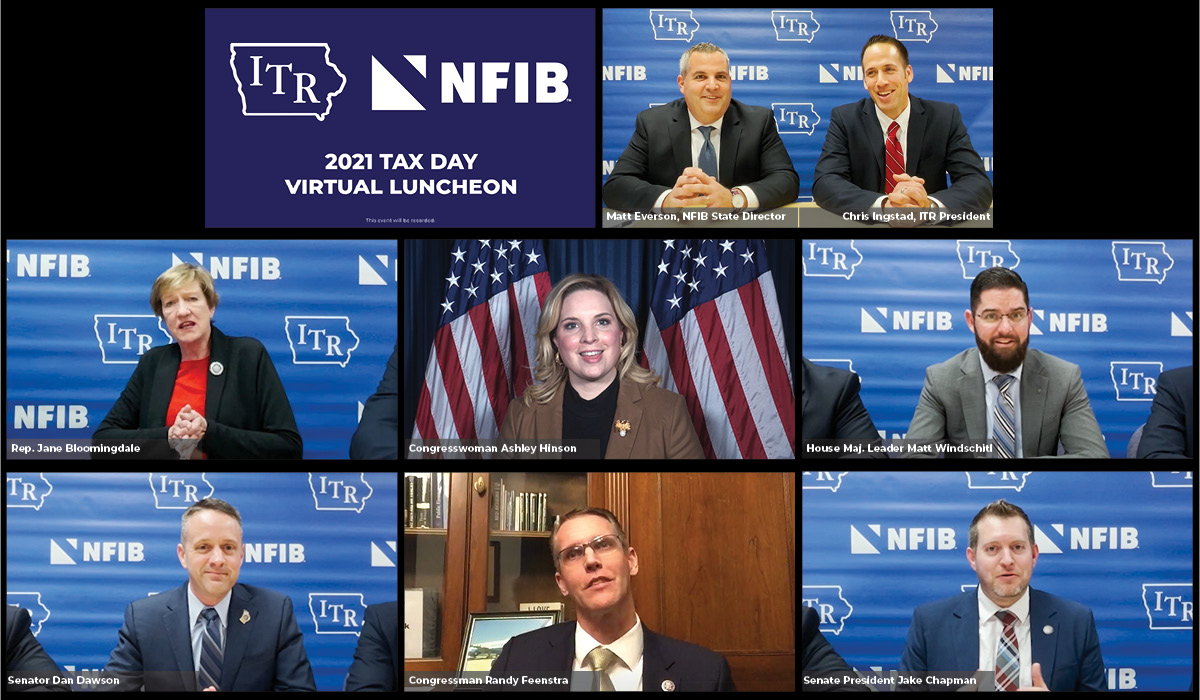 This year's ITR-NFIB Tax Day was held virtually. We heard from four Iowa legislators and two of our state's new Congressional members who are working to get the government out of your pocket and off your back. Below are some quotes from the participants about issues ITR members care about.

"I've been hearing a lot from small business owners and families who are worried about potential tax increases. Rest assured, I will fight against any tax increase that would make life harder for Iowans who have already faced enough challenges over the past year.

The Federal government needs to make it easier for people to save money and to get back on their feet and that is exactly what I am focused on here in Washington."

"I will continue to support policies that allow Iowans to keep more of their hard-earned money. That includes fighting against any attempt to raise taxes. On the campaign trail, President Biden repeatedly named repealing the tax cuts and jobs act as one of his top priorities. Thankfully, that has not come to the House floor yet. But if it does I'll be an outspoken critic of this effort and of course vote no.

I have advocated against a two trillion dollar COVID spending bill that only nine percent of it went to COVID. This is a shameless bill where we as Iowans are responsible for how we spend our money and yet they want to take our tax dollars and give them to New York and Illinois and California where they were irresponsible with their taxpayer money."

"I was really excited when the Governor, during her state of the state address, talked about eliminating the triggers. I think she even said they're unnecessary and I couldn't agree more. They are unnecessary triggers at this point and so we've got to at least get that done.

I think we need to look much broader than that. The reality is even with those tax cuts, removing those triggers getting us from 8.98 down to 6.5 percent, we're still a very high-income tax state when you compare us to other states in the Midwest. My goal is the total elimination of income tax. Why don't we put something forward that's very bold and have a phase-out approach towards a total elimination and keep our greatest resources here, and that's our people?"

"There’s a lot of back and forth on whether we reduce the triggers or cut the triggers that we established in our previous income tax bill. That's part of the discussion. I think one way or the other we're going to hit those triggers anyway so to me it's almost a moot point. But if we can accelerate those and get those tax cuts in sooner, we're exploring those options. "

"It is a common theme we hear as legislators that people are really upset with how much they're having to pay just to live in their home.

This is about local government living within their means. I'm not sure the issue of property tax and reining in property tax can ever really be addressed until we address school funding because that is by and large the biggest part of your property tax bill.

What we find is local governments will use their assessor to increase the valuation of property so your local elected officials don't have to raise property tax rates. They can simply say we kept the tax levy the same or we might have lowered the tax levy rate, but the reality is because of increased valuation they're bringing in a lot more money. The net effect of that is increasing taxes. So, we passed truth-in-taxation requiring more transparency when that occurs.

We'll see how those continue to play out but more needs to be done. I think you have a number of legislators that would really like to address the property tax issue."

We did have a bill a couple of years ago to introduce a little more transparency and make people aware of an increase of more than two percent. People just didn't seem very interested. What I found in my hometown and most of the area, is that it's easier to complain about it than to go in and fight about it."

"I have a niece that died recently and unfortunately her parents died a few years before her and left her and her sisters a farm. Their grandma died a year before and left them another farm. So, the four girls had a couple of farms that they own together. When my niece died, she was single and without children, no parents, and no grandparents. She left her farms to her sisters.

In Iowa, the inheritance tax you pay when you leave something to your sister versus a child or a spouse is ridiculous on a 160-acre farm. You're going to pay $160,000 in tax. They only make $30,000 or $35,000 a year. You can't pay it off. Unfortunately, they had to borrow to pay this off and were barely able to keep the farm in their family.

What is so ridiculous is that my niece's grandmother would have outlived her, literally talking six months, there would have been no tax. Because they died in that order, the inheritance tax was about $160,000.

I think we need to do something about this. It's simple fairness. It's not fair that I can leave a farm to a child, but I can't leave it to a sister or a brother or a niece or anyone."

"If you look at the inheritance tax section in the code it's over 20 pages of how to tax someone's assets after they die. Some are exempt. Some are some have different rates of taxation.

To me, the entire argument is a morbid argument. You know, when someone passes away what they would choose to do with what they've worked to accumulate their entire life -- if they want to give it to a church, if they want to give it to a family member whether it be a brother or kid so on so forth, that's between them and those individuals. I don't see any compelling interest the government has to actually get involved in someone's estate after they die just to take a portion of it.

The Iowa Senate is moving forward on trying to eliminate that inheritance tax."

"We looked at the governor's licensing reform bill the last year and wanted to get that done to cut burdensome red tape. We want to make sure that people out there that are looking for a good career and a good profession can do that and be able to function in society without having to jump through one bureaucratic hoop after another. We're looking at more reforms this year."